Some tag synonyms I found

On the contrary, I still don't have the Synonymizer badge :(

Did you know that you can propose synonyms directly on tags? 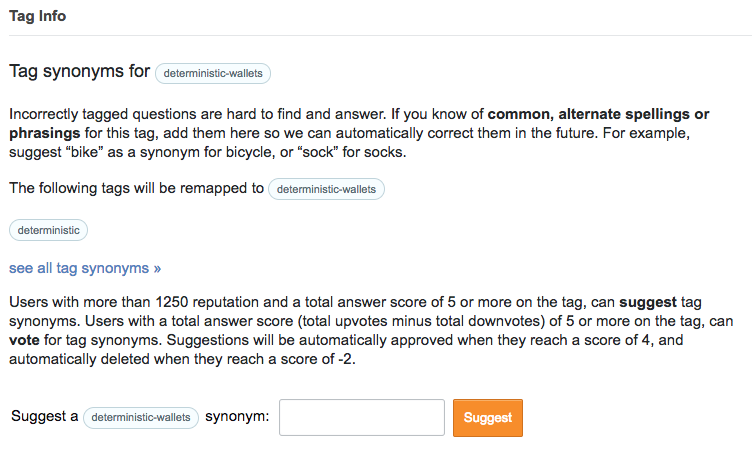 Other users can then vote on your synonyms, they don't have to be created by mods necessarily. ;)

In case you had done that already and nobody noticed yet, I'll have to look into how proposed synonyms get voted on. Anyway, I can take a look at these a little later today, although I think some of them should be switched in direction.

I've also cleaned the questions for which the tag improvements weren't fitting. I have not adopted the seed and hacking changes yet, I'm not sure they are improvements.

Not the answer you're looking for? Browse other questions tagged discussion tags tag-synonyms .

9
Why are 'wallet' and 'e-wallet' tagged as synonyms?
1
Is it worth creating tag synonyms for seldom used tags?
0
Should questions of the form "Is X a scam?" be removed?
1
What tag should we use for brick and mortar store payments?
1
Weekly Topic Challenge: Let's ask about TumbleBit‽
12
Is it safe to mention bitcoin/other coin related information on this forum?
2
Some possible synonyms I've found
0
Do we have a canonical question and answer pair for the watch-only scam?
2
Should private-key-format and wallet-import-format be merged?